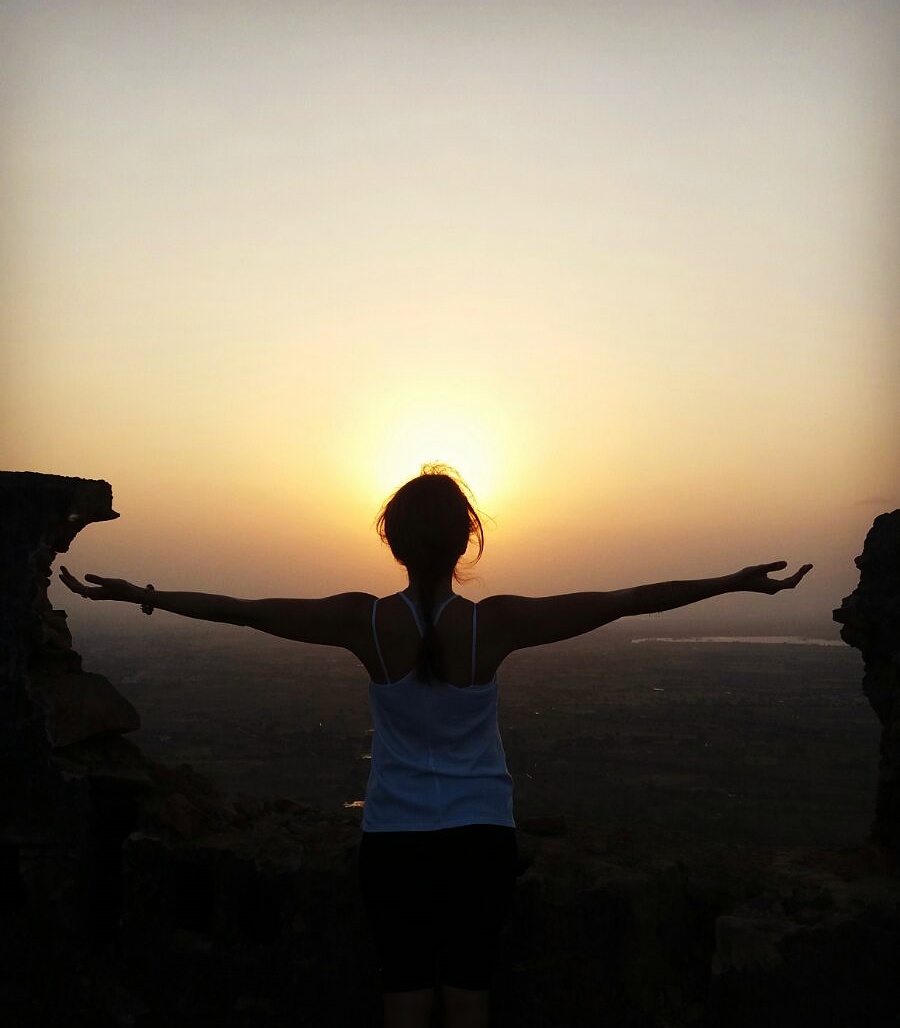 I feel absolutely amazing!!!!! The day started off with chai (ah, chai!!!) which I watched being made. I only then realized I haven’t been drinking masala chai here (like at the road side stalls) but rather Deepa makes ginger and basil tea. WHAAAAT?!?!?! Yes!! Wonderful yoga class this morning, I wasn’t alone, apart from the troop of massive, arrogant black faced monkeys that made there way up over, around and under the yoga room, the 4 Chinese have arrived for a 2.5 day course and an Israeli girl dropped into the class. We then did the Neti cleanse, pouring salt water in one nostril and letting it run out the other and vice versa and repeat.
Breakfast was again just too divine and nutritious. A kind of big courgette (that just auto corrected into counterterrorism.) grated and mixed with chickpea flower and rolled into balls and fried, then put into a spiced tomato onion gravy. With roti (chappati) finished with ghee! Soul food. Have I said that already?

We then had more ginger basil chai, which I made this time…. Added ingredient…. Cinnamon. Mmmmmm…
I, then, embarked on a shower, hair wash and shave. As earth child as I could probably let myself become out here, I thought it was the right time. When I say “a shower” don’t imagine me in a Pantene advert. It was a constant effort between 4 nossils, 2 taps below and 2 shower heads and the game it became to get a steady stream running consistently through one vent was, to say the least, humorous… every time I turned one tap the water either stopped coming out of the other or came out of both and then stopped.
I’m water conscious to begin with, so a thorough lather, shave and shampoo with the taps turned off is normal for me anywhere I am in the world! BUT the rinse may have taken an age. I eventually gave up the shower trickle game (I forgot to mention this shower nossil needs to be scrubbed to free the water as the sand particles build up and block it daily) and rather crouch under the strongest running tap. It was liberating!!
I decided, who said showering means ‘STANDING with water GUSING over your head like a waterfall?’ Most of you reading this are lucky enough to have that, but crouching under a tap (can’t help giggling)… It had it’s joy too.
I was on my haunches resting my back against the wall, with this water finally pouring over my head, just thinking “This is a cool way to wash as well.” So, yeah. . . It’s those primitive and less than glamorous moments when you get taken down to the basics and. . . it’s not something you ever planned to happen to yourself, you know? As you’re wandering aimlessly along the path of enlightenment. You DON’T imagine yourself squatting in a shower. 😂

The sun is out today, so I did my washing. Hands-in-bucket slosh–slosh washing, rinse and RING OUT… And MY ARMS!! Back to basics house work isn’t for sissies. The trick is to get in there, feet and all, the old grape-stomping way.
Heat of the sun has dried my hair and I’m double clean and fresh after all the soap I’ve been submerged in this morning. It’s 1 o’clock. Perfect time for a little read and nap.
Forgetting to cover myself in ODOMOS (note: best mosquito repellent ever with vitamin e and also coconut oil) is still my rookie error. Been eaten alive by mozzis just sitting out here in our little lecture hut.

“The first step in yoga is to engage in introspection and hereby understand the inner obstacles that must be overcome. The purpose of yoga is to weaken the hinders few which obstruct  knowledge of the soul. These five hindrances are: ignorance, egoism, attachment, averism and tenacity.”

India poses you with the difficult questions, like “What should I do now?”

Possible answers: Light an incense stick and watch it burn, or collect little white flowers that have fallen off the Night-blooming Jasmine tree outside and arrange them along my window frame.

I’m still somehow allowing exterior stuff to intrude on my yoga practice. Surely for an hour and a half my mind doesn’t need to take any opportunity to rehash the recent events of the past that left/have left me feeling less valuable or lovable than I was before. 😡

I don’t want to allow this poison into my yoga practice. What a destructive mind I have! Resetting and reprogramming is going to be exhausting.

In more positive news, my biggest challenge in yoga are my forward bends. And after 3 days of morning and evening practice I could put my head on my knee in Janusirsasana and also got it down in full pose Paschimottanasana. This is HUGE yoga progress news for me. And although the repetitiveness of doing the same asanas day after day, morning and evening, can be tedious ~ it’s how you work to get results.

Night from me and my frog friends. Gonna attempt a little tantra meditation before bed. Although enjoying the effortless sitting on my bed listening to the festival music blowing in through my windows with the slightest breeze.