It all started at Bride&co one Friday afternoon, where “always a bridesmaid, never a bride” syndrome took the reigns…
I was having a fitting for one of my oldest friends weddings and at the same time supporting an old student in a wedding dress hunt.
She wanted my advice and asked me which dress I would choose.
I looked around at the rails and rails of mass produced shiney meringues ~

“HONESTLY? I wouldn’t take any of these FOR FREE”
As I said that, I caught a glimpse of lace and in all it’s simplicity was drawn to the single unimbelished dress in a fish-tail design which just so happened to be too beautiful for words, and a size 12, perfect for my pretty Libyan student. It fit her like a glove. I watched her whirl and swirl. In MY dress.
It didn’t take long before I hung up the bridesmaids dresses and snuck into the changeroom, with the lace gown, true “bridesmaid gone rogue” style and slipped it on…
Holding it tightly behind me to make it fit my size 8 frame, I walked out into the viewing room. My student’s jaw dropped (probably innitially horrified) as I stepped up onto the elevated platform infront of the mirror and turned just enough to swoosh the fish-tail perfectly.
As she snapped a sneaky photo, the manager came around the corner. And just as she’s trained to do and say, she uttered all the right sounds of approval and made all the right eyes- followed by “When’s the special day?”

“Oh! No no no! I’M not getting married. I don’t even have a boyfriend…” I said with a huge, proud grin.
Awkward silence.
… I’ll just stand here a little longer and absorb this princess moment. Unengaged. No Mom or future Mom-in-law or best friends gasping and weeping “That’s it! That’s the dress!”

Non of that. Just me and my reflection and my “fuck normal”mentality. Like… Who says that a completely and utterly single 31 year old has to wait for someone to love and accept her for all the glorious madness she is until she gets the opportunity to stand exquisitely beaming in a long lacy (or meringue-like) bridal gown and feel magnificent? 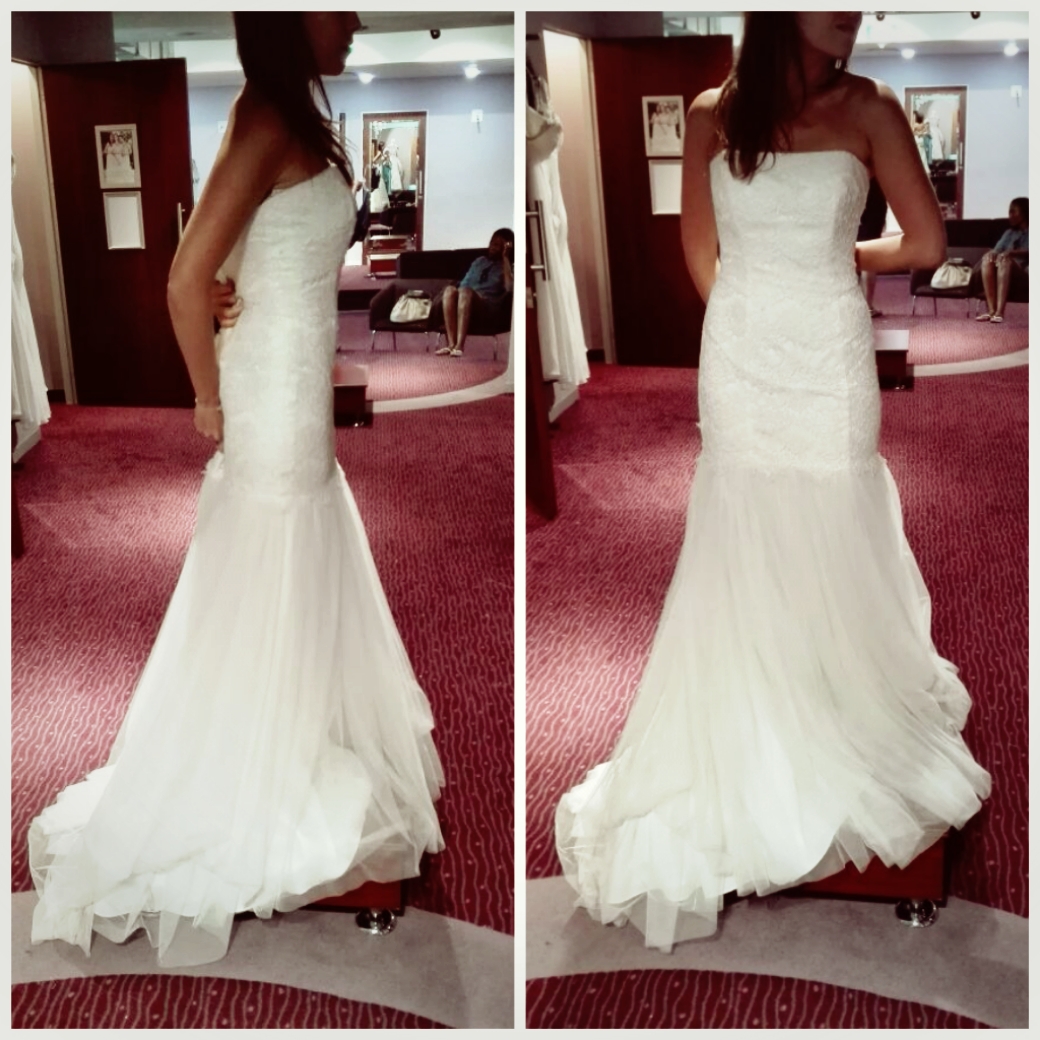 Insert “Independent woman rule #1 : YOU DON’T NEED A MAN”
Do your thing honey!

I left Bride&co feeling beautifully silly and liberated. I didn’t fear having put a jinx on my married/unmarried fate. I had simply broken the ice of anticipation for a moment that won’t make or break my life. I felt all powerful, complete and unstoppable.
(And if you’ve read any of my stories before, you’ll know what happens the moment I’m contently not falling in or recovering from love – When my heart is strong and unfuckwithable again… When I’m so okay in my own skin that I truly am not interested in men. You have an idea of what happens next, right?)

This energy carried me into the night. A friends birthday excitement led to a few tequilas and a little bit of carefree spontaneity. I was keen to dance and so was everyone else.
…and then, all of a sudden, the party animals were tired and wanting to wake up early on Saturday morning. On the first night in forever that I actually felt like being out and about. And with that, they went home. And with that – well – I didn’t.
I took myself to my favourite club, to my favourite platform a little above the dance floor and without a second thought I was dancing… but not alone… AMONGST a sea of other dancers. Why would I stick out from the rest?
That’s a legitimate question I’m asking. Why would I have not looked like just another girl in the crowd? Why were people so drawn to me? Why was I being asked “Who are you here with?” by men and women alike?

“Just me”
“I’m seriously impressed, I never thought I’d meet a girl who’d have the guts to come to a club alone”
I smiled and shrugged (like it was the most normal thing in the world).
The energy I was emitting was clearly magnetic. And from the corner of my eyes, there were men, hovering…circling… I really didn’t give a shit. I was celebrating freedom from conformity – I didn’t want to talk, I didn’t want to be hit on with seedy remarks (as per usual), I was very happily dancing on my own.
And then like all predictable cliches, an equally magnetic boy with a cute as hell gap in his teeth comes around for the third time. I couldn’t help but show appreciation for his vibe with a slight smile and … damn, like with most male/female courting, that signals acceptance and submission and he came in for the kill.
Less aggressively than I’ve stated, much less in fact, he was a rather smooth cat. Like his hair.
“Who are you here with?”

“Just me”  in my nonchalant manner.
(I found out later that he’d bailed on his mates and come alone too).
He brought me water, told me he’d been attracted to my energy from across the room and asked if he could take me for a milkshake soon.
I teased him about being gutsy enough to see me in the light, not realising the lights were already on in the bar, as it was closing time.
He saved my number in his phone as:

The following day one of my more free-spirited friends told me SHE wouldn’t even be brave enough to go out dancing alone. Others expressed how much they’d love to be able to do it. And only then the realisation of how possessed I had been settled in. It was a pretty bold move and the residual effects were beaming.

What has followed this unusually satisfying day is a story for another time. But what I do know for sure is this:
The moment you stop looking. It finds you.
And I’m not speaking solely about love or the perfect man.
I am talking about that illusive inner contentment we all chase.
You can fake a smile and put on your brave face as we all have to ~ to get through the dips in this ride. But energy doesn’t lie. When that moment of TRUE self acceptance, universal love and gratitude hits you within – it radiates outward. It attracts other beautiful energies like a blossoming tree buzzing with bees. 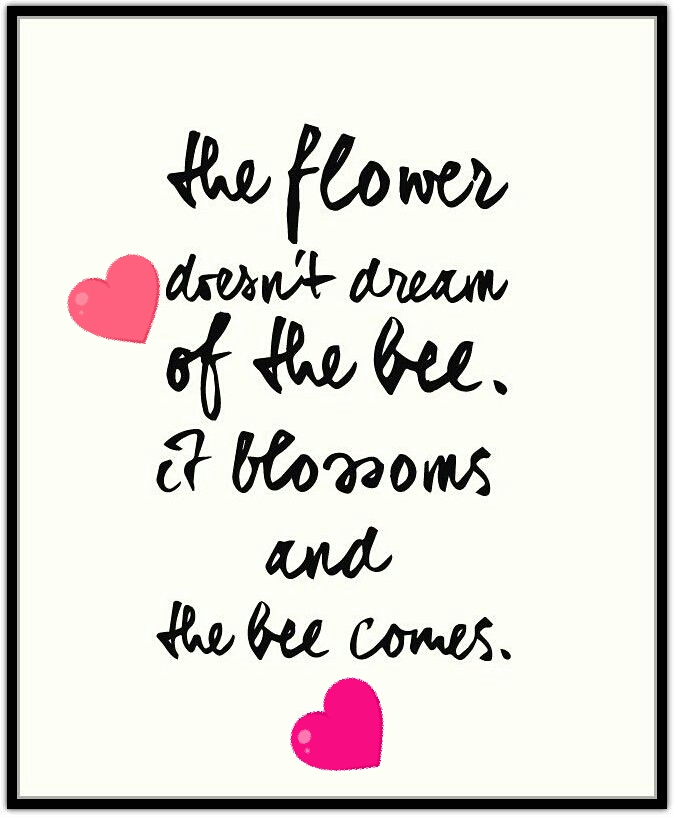 And we can all agree that The Universe has pushed my buttons of late, pushed me into what felt like dark corners with names I wanted to forget being screamed in my face until I cracked. Taken me deeply through a process of seeking more (and finding it) and ultimately letting the light come in through the broken bits, and for all of that, I had one wish.